Bundaleer, situated in the Mid-North of South Australia, was purchased by W.B. Ashby & Sons in 1919 and consists of undulating to hilly country with some rich farming plains at Gulnare and red brown soils north-west of Spalding. Bundaleer receives an annual rainfall of 18 inches.

The Bundaleer Stud was founded in 1944 by the late T.E. Ashby with the purchase of two females and a bull from the stud of H.C. Mayfield “Donnybrook” Victor Harbour, to breed bulls for northern pastoral areas of South Australia. Further heifer purchases over the next 4 years were made from “Donnybrook” and the “Nalpa” stud of A.R. Withers Strathalbyn.

The most influential impact occurred between 1970 and 1976 with the purchase of Mandalong Royal Charles (P), Mandalong Super Furnace (P) and Mandalong Super General (P) for a total of $39,000. Their sons were keenly sought after in top stud and commercial herds through-out Australia. In 1978 Bundaleer Dixon was Supreme Champion at the Sydney Royal Show, and sold for $6,000. He became one of the leading sires in Australia and his bloodlines laid the foundation for the infusion of the new generation American sires. The following year 1979 Kelso Royal Supermark (P) was purchased by Bundaleer for an Australian record of $27,000.

The stud has held on-property stud and commercial sales since 1963. Also since 1956 bulls have been sold at the Naracoorte and Alice Springs sales and since 1978 at the Dubbo National Show & Sale, Bundaleer has sold bulls to $19,000 and females to $12,000.

For the past 25 years Bundaleer has used A.I. and Embryo Transfer programmes, to fast track their genetic gain. In 1992 Bundaleer joined Shorthorn Group Breed Plan to evaluate and benchmark their herd within Australia. With visual selection and breedplan data Bundaleer has been able to validate their quality with performace.

Bundaleer Stud semen has been exported from some of Bundaleer’s top young sires to the U.K. , U.S.A., Canada, & N.Z. with outstanding results. Semen has also been sent to Argentina and N.Z. to commence a satellite herd in line with the Durham Research and Development Herd in Australia.

Bundaleer aims to breed bulls with sound structure and strong constitution, well muscled, with easy doing ability, and rich strong colours to survive in the harsh conditions of the Australian pastoral country for which they are renowned. Bundaleer cattle have also been foundation stock for many studs throughout Australia. 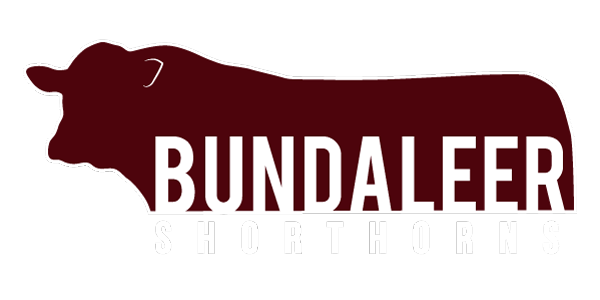